The following is an update on hydrology affecting the basin above Fontenelle Reservoir as well as anticipated operations at the dam.

As of February 22, 2017, the to-date snow pack in the basin above Fontenelle was at 192% of median for a total of 145% of the seasonal median, historically wedged between two other high snow pack years of 2011 and 1986. The following graph demonstrates the snow water equivalent (inches of water present in snowpack) as those years progressed through the season along with the median (average between the years 1981-2010) and the current year’s snowpack. 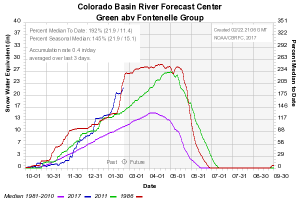 The following graph is a recounting of releases from Fontenelle in the years 2011 and 2016 (last year’s runoff) between the months of February and September. This graph is provided to demonstrate a high snowpack year (2011) compared to a roughly average snowpack year (2016).

Fontenelle is currently releasing 1,025 cfs (cubic feet per second) which is expected to continue until the threat from downstream icing has passed. At which time releases will be increased to near power plant capacity (around 1,300 cfs). Going forward and depending upon further accumulation of snowpack, releases as early as mid-April may reach 4,000 cfs with early June releases reaching between 8,000 and 11,000 cfs. While a variety of snowpack situations may play out over the coming months it is important for Reclamation to convey to stakeholders that the Colorado Basin River Forecast Center is now predicting a near 50% probability that the snow pack this year may be greater than the highest year on record for the basin above Fontenelle (1986). The facilities and procedures in place at Fontenelle Dam are sufficient to handle even the highest flows currently forecasted.

We look forward to working with stakeholders as we continue to analyze snowpack and reservoir operations and encourage anyone with concerns to contact us directly. A Fontenelle working group meeting will be held at Seedskadee National Wildlife Refuge in Green River, Wyoming on April 19, 2017, at 10:00 a.m.