So the roller coaster ride is still happening with the flows! We’ve had some enormous storms in the area over the past week which had only added to the unpredictable runoff given all factors to be considered. The Green and New Fork Rivers are currently rising and are forecasted to level out at the current flows over the next week, per the NOAA Green River Runoff forecast. 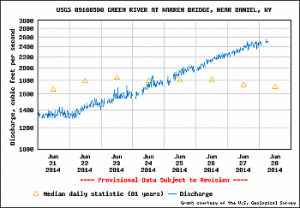 The fishing/catching the past week has still been productive and plentiful. The fish are eating the Golden Stones on the surface, the classic turd and a worm for the subsurface setup with plenty of spit shot and the streamer action has been best on the JJ’s special or a pattern similar in a golden or yellow color using a 250 grain sinking line.