Reel Deal Anglers FULLY SUPPORTS the fact that warm temperatures may be stressing fish action and we have voluntarily refrained from guiding on the Upper Green and New Fork Rivers since 7/17/2016. 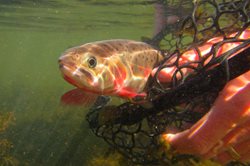 As Wyoming is experiencing the high temperatures of summer, trout are grappling with reduced food and oxygen, and in many instances, their very survival.

PINEDALE – The current warm conditions have fish managers with the Wyoming Game & Fish Department concerned about the impacts on both fish and anglers. As water levels drop, temperatures rise. Cool and warm water species such as walleye or bass can generally tolerate the harsher conditions, but warm water is a real threat to trout and other coldwater species.
Pinedale Fisheries Supervisor Hilda Sexauer says trout experience significant mortality at prolonged exposure to water temperatures greater than 70 degrees Fahrenheit and brief exposure to temperatures over 80 degrees are also lethal. “Unfortunately we are likely to lose trout in area streams due to low water, warm temperatures and a lack of oxygen if the high temperatures continue,” Sexauer said. Fish stress quicker in warmer water because the water holds less oxygen, which greatly reduces a fish’s ability to recover from the rigors of being caught.
Pinedale Fisheries Biologist Darren Rhea has been monitoring water temperatures in the Green and New Fork rivers for the past few weeks and has seen a rise in temperatures during the past week. “Afternoon high temperatures have exceeded 70 degrees in the Green River and New Fork River since July 18,” says Rhea. “Area anglers, particularly those fishing the Green and New Fork rivers, should limit their angling to early morning and late afternoon to avoid stressing or potentially harming fish they don’t intend to keep.”
Water temperature is particularly important for anglers practicing catch and release or where our regulations require fish to be released. The department asks all anglers practicing catch and release to consider the following during the dog days of summer:

These are not new regulations, just recommendations to assist with the conservation of the fishery resource. If water temperatures are high, perhaps escape the heat with a trip to the high country.
(Mark Gocke, Regional Info & Education Specialist)